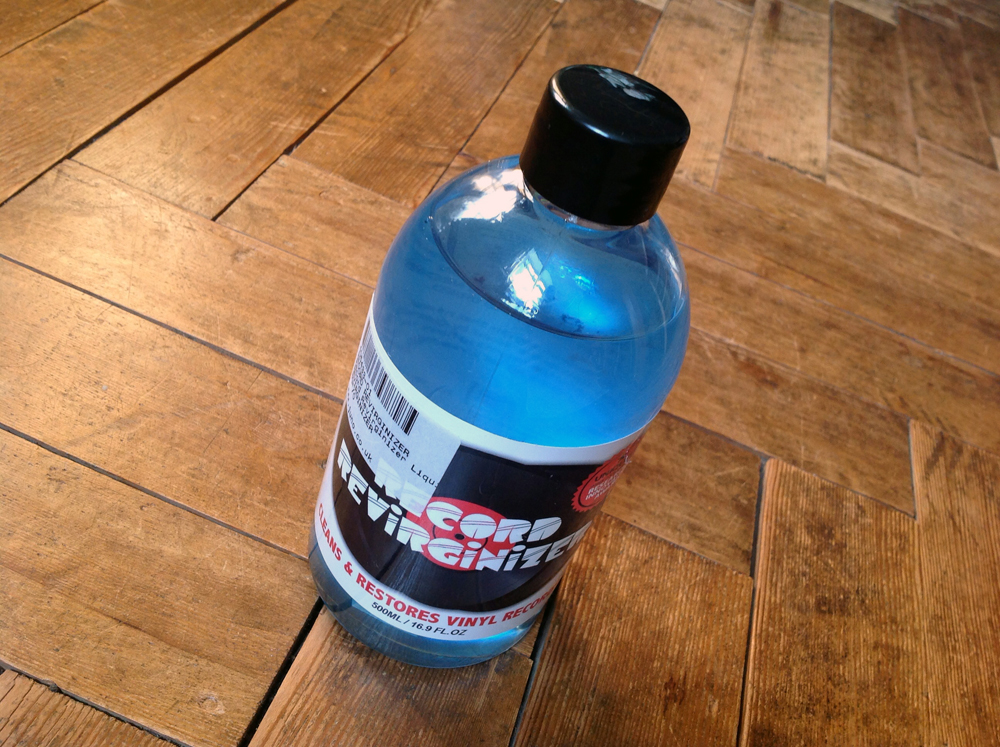 Over the years I’ve tried all sorts of methods for cleaning vinyl records. Some more effective than others. Yesterday I tried a product called RECORD REViRGiNiZER, with excellent results.

RECORD REViRGiNiZER is a liquid polymer for pouring onto the surface of a record and massaging into the grooves. After leaving to dry for a few hours it can be peeled away, like a facemask, taking with it ground-in debris, mould, dust, dirt and other contaminants.

No matter how hard you try to keep your records clean, microscopic particles sometimes find their way into the grooves. If your records appear to be free of scratches and surface dust, but suffer from background noise, crackles and pops, you can bet that crap has got into the grooves and been well and truly driven in by the stylus.

Prevention is always better than cure. The simplest and most effective way to keep your records sounding great is to store them properly and clean with a carbon fibre record-cleaning brush before and after play. Lately, I’ve been buying a lot of old, rare vinyl. Some of it has been looked after well, some not. I never buy vinyl that has visible scratches or other surface marks. But sometimes I buy something that looks perfectly clean only to find it crackles and pops when it’s played.

There are all sorts of ways to deep clean vinyl, but some can do more harm than good. And some are very expensive. In order to deep clean a piece of vinyl I’ve always found the safest way is to hold a record vertically above a shallow trough containing distilled water and wash it with a microfiber cloth – making sure that the centre label doesn’t get wet – rotating the vinyl and cleaning small sections at a time. I have never used any kind of detergent, solvent or alcohol based solution. Some chemicals are toxic to vinyl and almost every cleaning solution leaves a residue. I’ve been tempted to invest in a record cleaning kit, like the Spin Clean Vinyl Record Washer. But never got around to it. If I could afford to, I’d buy a professional wet vacuum cleaning device, like the Moth Record Cleaning Machine. But I can’t justify the expense.

Somewhere along my travels through the Internet I came across RECORD REViRGiNiZER – developed by Cary Stoddard. I’d seen videos on YouTube of people coating their dirty vinyl in wood glue, letting it dry then peeling it off, taking all the embedded crap with it. The principle seemed sound, but risky. It looked quite difficult to peel the dried wood glue off the surface of a record. In principle, RECORD REViRGiNiZER works in the same way, but Cary Stoddard has added a lot more science. REViRGiNiZER is formulated with just the right level of viscosity so that it can be worked into the grooves without running all over the surface of the record, enough elasticity to peel easily when dry, and with a grip strong enough to remove embedded material. At the same time it does not leave a residue, nor does it damage your vinyl in any way. The anti-static properties of the formula ensure that once the film is peeled off your vinyl will be static free.

I thought I’d give it a go, so bought a 500ml bottle of Stoddard’s magic solution from www.juno.co.uk and decided to clean my 12” copy of Atmosphere by Joy Division. I’d recently bought it from a vinyl dealer. The cover and vinyl had no signs of dirt or wear, but the record suffered from background crackle when played. It was with some trepidation that I prepared to REViRGiNiZE it. Not only is the record a first pressing, it’s also one of the few pressed on translucent vinyl which looks black, but glows dark red when held up to a light source. It’s a precious thing.

I followed the instructions written on the back of the bottle and shook the solution for 30 seconds.

I laid my copy of Atmosphere on a flat surface then washed my hands.

I poured approximately 20ml of REViRGiNiZER onto one side of the record, avoiding the centre label.

With my fingers, I massaged REViRGiNiZER into the grooves of the record and, once evenly coated, I placed a small piece of paper into the viscous solution at the edge of the record.

I left the record to dry. The drying time varies depending on humidity and ambient temperature. The day was cold and rainy. I checked the record every couple of hours. The solution took about 6 hours to cure.

I used the paper tab to carefully peel the dry elastic film from the surface of the record. The bulk of the film came away in one go, leaving only a few small isolated patches of rubbery REViRGiNiZER. These were easily removed by gently dabbing with some of the film that had already come away.

Once I’d removed all of the transparent film I played the record. It sounded great. So much better than it had done before cleaning. Only one, very short, feint crackle remained.

RECORD REViRGiNiZER is not a cure-all. It cannot remove or repair surface damage. Worn grooves and scratches are there to stay. In some cases, ground-in particles may be so engrained they are impossible to remove completely. Nevertheless, the manufacturers guarantee that you will notice a sonic improvement after treating with REViRGiNiZER records that were once made unbearable by extraneous noise. Compared with other cleaning methods, using REViRGiNiZER is low risk.

One thought on “Record Revirginizer – a neat way to clean vinyl”