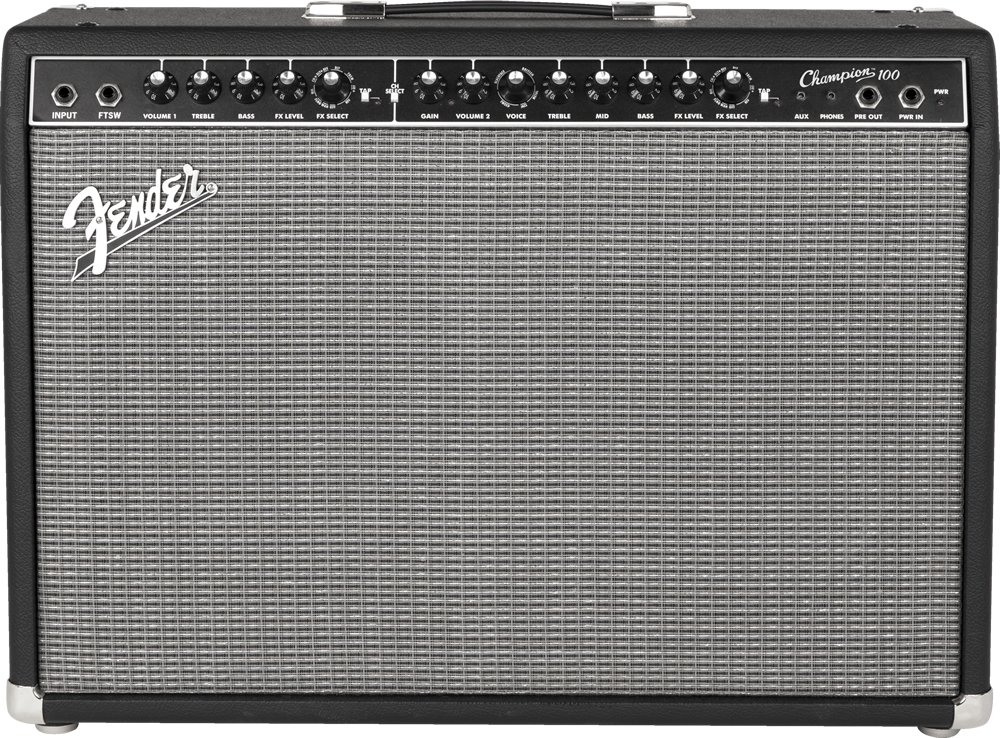 I play in a band. My son, Harry, plays in a band. By default we own a lot of amps and guitars. Our collection includes a couple of beautiful valve amps: a Marshall Custom JTM Offset and a Fender Hot Rod Deluxe III. So why did I buy Harry a solid state Fender Champion 100?

Harry loves my Fender Hot Rod and he uses it now and then for gigs if the venue has no backline. He’s about to go off to University and needed a new amp to take with him. Getting another Hot Rod was out of the question. Big valve amps like the Hot Rod give great tone, but they are heavy and expensive. He needed an amp that sounded great, but something relatively inexpensive and lightweight. While at university he might get to and from gigs by public transport. Valve amps are not only heavy, they are relatively fragile. Chucking something like a Hot Rod around on public transport would inevitably result in broken valves. So we decided to check the market for a good quality solid state amp. They tend to be lightweight, robust, reliable and less expensive than valve amps.

We tried a lot of amps and read a lot of reviews. In the end we decided on a Fender Champion 100. It’s a solid state amp which sounds great. It has a vintage style Fender control panel with skirted knobs. Harry is not a fan of amps with endless features or modelling settings. They tend to be fitted with fiddly controls which are difficult to use when playing live, particularly if there’s little stage lighting. Dialling in the Fender Champion is straightforward. It has two channels which are laid out like the old Fender Blackface amps of the 60s.

The first channel is designed to sound like a classic Fender Twin Reverb. It does a good job of producing gloriously clean Blackface tones. The controls on the first channel are laid out like a Blackface amp with Volume, Bass and Treble. Unlike an old Blackface, it includes FX Level and FX select knobs. You can choose to use no effects or select from 16 different options, which include varieties of wah, reverb, flange, vibratone, chorus, delay and tremolo.

The second channel adds a few more options but the controls are still straightforward and easy to use. A gain knob allows you to dial in crunch and dirt, while a voice control gives you access to 16 different amp voicings which include British and American tones such as Tweed Bassman, Tweed Deluxe, 65 Princeton, Super-Sonic, 60s British, 70s British and more.

If you want that classic Fender Twin sound, use the clean channel. If you want versatility or just want to get plain dirty, use the second channel. The amp comes with a footswitch which makes changing channels easy. The footswitch also enables you to turn the effects on and off.

The Champion 100 includes a tap button to control delay time or modulation rate when using the in-built effects, an auxiliary input so you can plug in a media player to play along with, as well as a headphone jack.

Harry would have preferred something a little lighter – the Champion 100 is twin-speaker, so it gives great projection, but it’s not small. It is, however, lighter than a valve amp of equivalent size. Fender make Champion amps at 20-watt and 40-watt, in addition to the 100-watt. The lower wattage Champions are single-speaker, smaller and lighter than the 100. But Harry needed an amp with enough punch and headroom to be heard in a loud indie band. Solid state amps are not as loud as valve amps of the same wattage. The volume of a 20-watt or 40-watt valve amp would have been enough for his needs, but we were concerned that if a 40-watt sold state amp was not mic’d up through a PA it just wouldn’t cut it anywhere other than a small venue.

The Champion 100 doesn’t have the richness of tone that you get from a valve amp, but it looks like a Fender, sounds like a Fender, is cheaper than an original or reissue Blackface and a lot lighter than a valve amp of equivalent size and speaker configuration. What’s not to love?